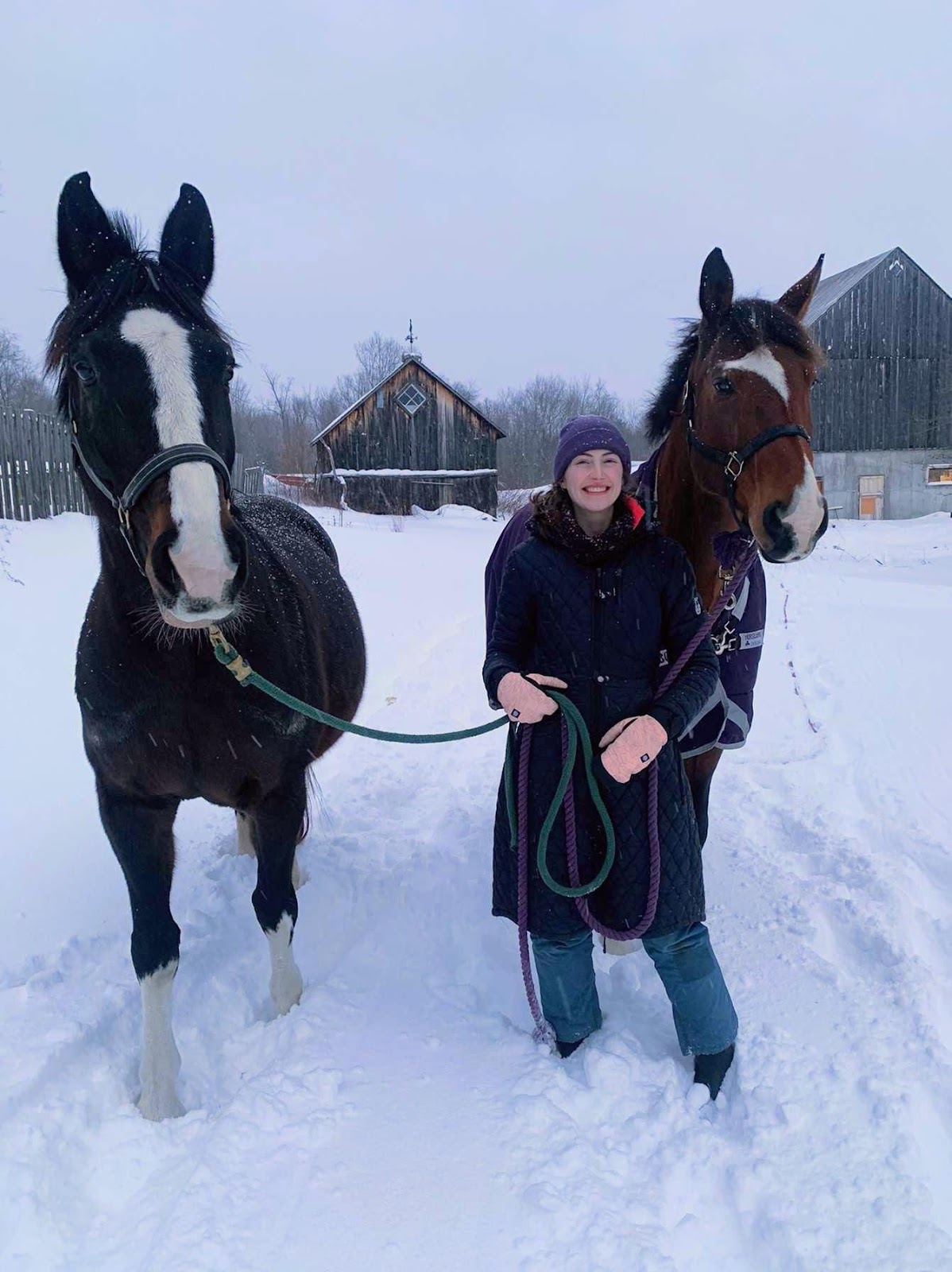 For many years, Elsie thought she was a true horsewoman. Growing up within the mainstream horse industry, where red ribbons (Elsie is Canadian!) and perfect braids personified knowledgeable horse ownership, it wasn’t until her mare Fara began breaking down in that very world that Elsie’s whole perception on life as a horse-person began to fall apart. Having once envisioned herself cantering down the centreline in an Olympic stadium, Elsie credits Fara for saving her from a world that was insidiously destroying both of their souls, one dressage lesson at a time. A tumultuous and painful unraveling ensued as Elsie worked to restore Fara’s health and tended to her own mental demons and emotional wounds. During this upheaval, Elsie met Ike, her second horse and a gelding who Elsie would later recognize as having salvaged her love of horses in those dark and confusing months dealing with the aftermath of her and Fara’s burnout. Now, three years later, Elsie is listening to what it feels like to be in her heart when she works with the horses. She feels like she is finally reaching for the sun, grounded in her power and her truth. She doesn’t quite know where she is headed yet, but she does know this:

She is a writer

She is a dreamer

and She is a horse-lover.

And she is open to the possibility that these may be the only things she’ll ever need to share with others and know about herself in order to make her impact.

For me, communication is everything and nothing at the same time. Communication is unlimited,uncountable, and often unseen. I try to inspire others to listen, and I love guiding them to find their pathto inner wisdom.Since I was a kid, animals have been more important...
Read More

Melanie has always had a love of horses, travel and adventure.  Growing up with a German mother who loved to travel she has visited many countries over the years.  Having empathic abilities she has always felt a strong connection to all living things especially...
Read More

One of the strongest memories I have from growing up is me sitting in the forest on warm moss covered ground. I am looking at a small peaceful stream of water running past my feet, streaks of sun shining through the firs, everything is calm and quiet. I feel totally...
Read More

I am a creator; nature and horses, my muse.  I am a dreamer, on a mission to explore and experience what it means to be alive.  Nature is my grounding point, where I feel most myself. Bare feet rooted in fresh dirt, sun permeating my pores, flowing through...
Read More

Today both Lina Petersdotter Johansson and Nica Ware shows up in the Canadian podcast, Sovereign Horse for such an amazing talk about the project and about horses way of guiding humanity. Come and join us for this magical talk!
Read More

Equine intuitive and storyteller Danielle has been passionate about horses since she was young. She read the books, went to the summer camps, had the riding lessons, and even learned how to train horses at 12 years old. After doing horses only part-time through...
Read More

Jennie has always been drawn to the magic of horses. She grew up spending her first 20 years on and off horseback at the local riding school in Sweden, competing both in dressage and showjumping with her own beautiful pony. She spent all her time in the stable. For...
Read More

As brave, free, curious, and aware I see it as my life's task to contribute together with the horses to our collective journey together by guiding people on the journey in different ways to remember who they truly are, in their unique, important, wise, beautiful self....
Read More

Lina describes herself as a mixture between the fluent, porling water and the deep vibrating hoofbeats of galopping herd of horses. Her journey is a constant journey home. Home to her self, mother earth and the horses. For the sake of that journey her life has been...
Read More

Marieke was terrified of riding horses for years. It wasn't just the strength and speed that horseshave that scared her. The fear was deeper. Afraid to lose control, no trust in her own abilities andscared to lose the trust between her and the horse. Riding is...
Read More