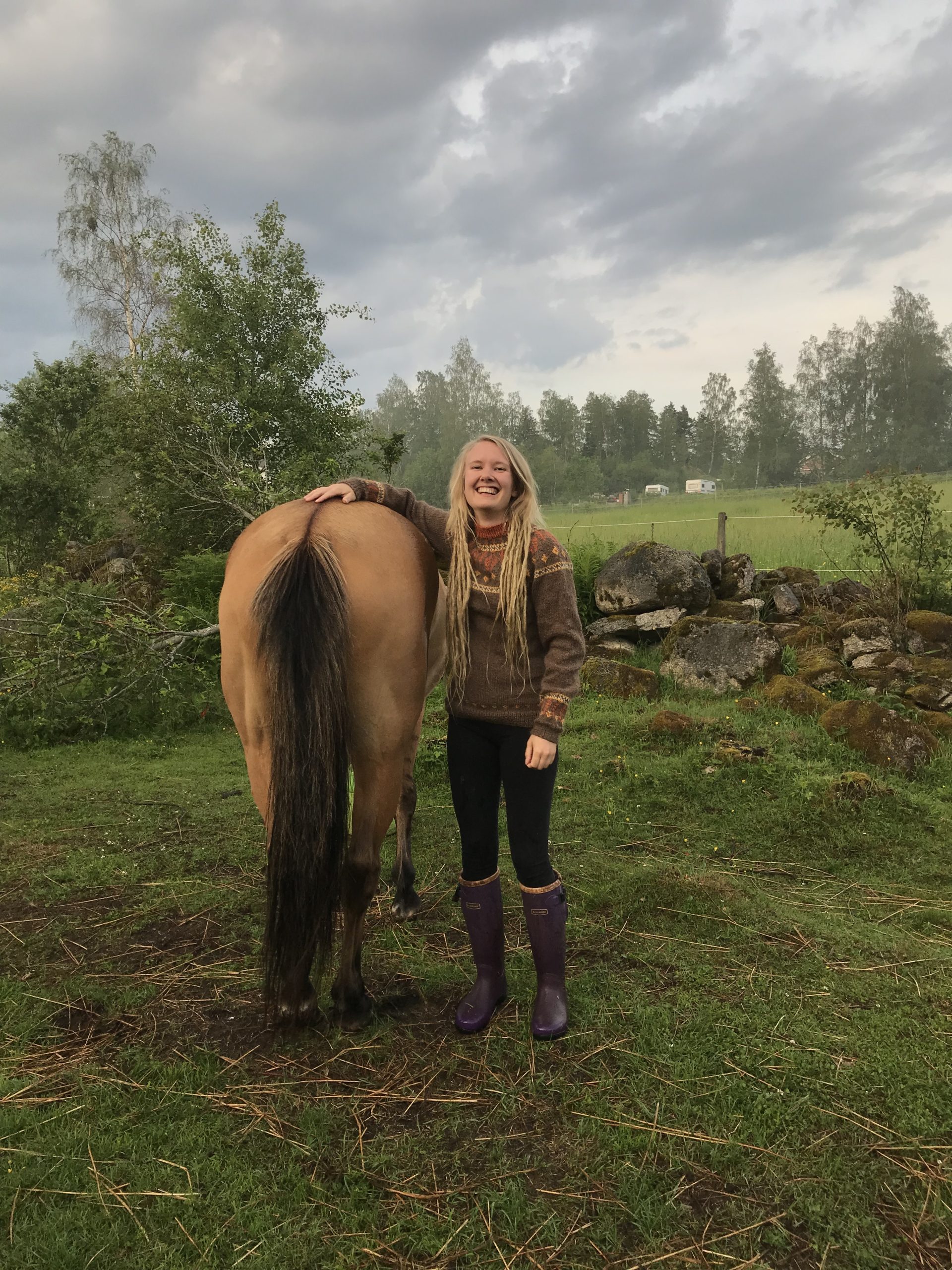 Lina is an experienced social worker, focused on working with youth. With a background in social studies, she explores topics such as equine-assisted interventions and different ways of training and interacting with animals in line with contemporary research in ethics. She does this with a focus on concepts such as empathy, self-compassion and acceptance. Together with her herd of horses she slowly opens up for others to meet horses in a gentle way.

Growing up, Lina often felt lonely, even in groups of people. Despite knowing the language and the social cues, communication and interaction with others were strenuous. Often feeling out of place, feelings of shame became a common companion. Instead, she found peace of mind among animals and in nature. When the world would turn too overwhelming, Lina sought comfort in the unconditional love given by the animals and the nature around her.

Today, Lina rather draws strength from this sensitivity and fragility. With the support of horses, and their sometimes rather firm messaging, Lina has found both the tools and a community where care and encouragement is at the centre.

If you would like to follow Lina’s journey and what she offers through her business, you can do so most easily through her social media channels or via her website. Lina lives with her closest people and her herd in Småland, Sweden.

For me, communication is everything and nothing at the same time. Communication is unlimited,uncountable, and often unseen. I try to inspire others to listen, and I love guiding them to find their pathto inner wisdom.Since I was a kid, animals have been more important...
Read More

Melanie has always had a love of horses, travel and adventure.  Growing up with a German mother who loved to travel she has visited many countries over the years.  Having empathic abilities she has always felt a strong connection to all living things especially...
Read More

One of the strongest memories I have from growing up is me sitting in the forest on warm moss covered ground. I am looking at a small peaceful stream of water running past my feet, streaks of sun shining through the firs, everything is calm and quiet. I feel totally...
Read More

I am a creator; nature and horses, my muse.  I am a dreamer, on a mission to explore and experience what it means to be alive.  Nature is my grounding point, where I feel most myself. Bare feet rooted in fresh dirt, sun permeating my pores, flowing through...
Read More

Today both Lina Petersdotter Johansson and Nica Ware shows up in the Canadian podcast, Sovereign Horse for such an amazing talk about the project and about horses way of guiding humanity. Come and join us for this magical talk!
Read More

Equine intuitive and storyteller Danielle has been passionate about horses since she was young. She read the books, went to the summer camps, had the riding lessons, and even learned how to train horses at 12 years old. After doing horses only part-time through...
Read More

Jennie has always been drawn to the magic of horses. She grew up spending her first 20 years on and off horseback at the local riding school in Sweden, competing both in dressage and showjumping with her own beautiful pony. She spent all her time in the stable. For...
Read More

As brave, free, curious, and aware I see it as my life's task to contribute together with the horses to our collective journey together by guiding people on the journey in different ways to remember who they truly are, in their unique, important, wise, beautiful self....
Read More

Lina describes herself as a mixture between the fluent, porling water and the deep vibrating hoofbeats of galopping herd of horses. Her journey is a constant journey home. Home to her self, mother earth and the horses. For the sake of that journey her life has been...
Read More

Marieke was terrified of riding horses for years. It wasn't just the strength and speed that horseshave that scared her. The fear was deeper. Afraid to lose control, no trust in her own abilities andscared to lose the trust between her and the horse. Riding is...
Read More